Okay this is my last post about Indonesia.  I promise!  There was just so much to see so I wanted to put up as many photos as possible.  After about a week and a half in Bali, I left the island and headed back to Java.  The easiest way to travel back to Java is by plane.  Of course I decided to do a 24-hour adventure that included a bus, a ferry and two trains to get to my next destination: Jogjakarta.


After all that traveling, I arrived in Jogjakarta.  I decided to go to Jogja as my major stop in Java because it was said to be interesting.  It had a lot of cool cultural things in the city.  Outside of the city was a large Buddhist temple, Borobudur, that I really wanted to see.  I met up with a girl named Dorotha at the hostel and spent my two days in Jogja traveling around with her. 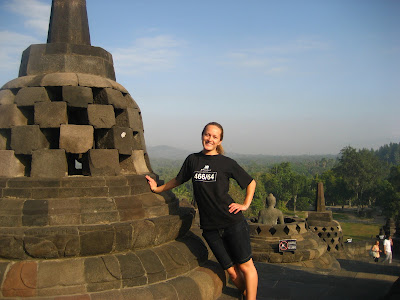 Later that day, Dorotha and I explored the cultural sites within Jogja.


After a couple days, I left Jogjakarta.  It was a really nice ending to my Indonesian trip.