In Between the Trips, Sometimes We Work

On Friday, we had an event in my community.  I helped the youth officer, village development committees and other individuals in Shoshong organize it.  Every March is the Month of Youth Against HIV/AIDS.  The Botswana National Youth Council (based in Gaborone, the capital) made Safe Male Circumcision this year's theme.  We broadened it, deciding to include the promotion of yearly pap smears for women.  Better to have a message that targets everyone, right?  We thought so.

The event was a success.  It was exciting because it went relatively smoothly.  And in Botswana speak that means:

1.  It started over a half hour late;
2.  One person who was supposed to speak did not show up, but we found someone else;
3.  A drama group that wasn't invited to perform asked to be put on the schedule at the last minute.

It is important to organize any event in Botswana with this attitude: "Go tlaa siama."  That means, "it'll all be okay."  Nothing will be on time.  Accepting that before you start is essential.  Protocol is very important in Botswana.  Once people sit down, they expect to be served and want to be treated as guests (ie ten of us put up the tent while 75 people sat and watched).  Also, people have a tendency to tell you what they don't like right off the bat.  People complained to me that they had to share copies of the schedule, that there was no food, that we started putting up the tent too late....you name it, they complained about it.  I smiled, nodded, and kept going.  Sometimes that's all you can do.

The event in pictures: 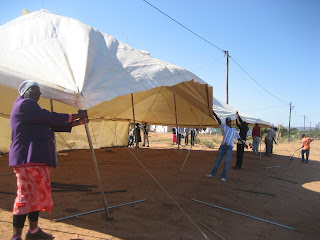 All of us putting up the tent.  I would like to report that there were no tent-related injuries, but that would be wrong.  The wind was really strong that day.  At one point, I was standing on one side of the tent while people were securing the other side to the ground.  The wind kept blowing the tent up.  I was doing fine until one big gust of wind threw me completely off of the tent.  I fell on the ground in front of at least 50 people.  My whole left leg was scratched, my knee bleeding.  Fifteen minutes before the start of the event, I had to go to the clinic to wrap it up so I wouldn't be bleeding down my leg all day.  Instead of being upset, I stood up and burst out laughing.  It was hilarious. 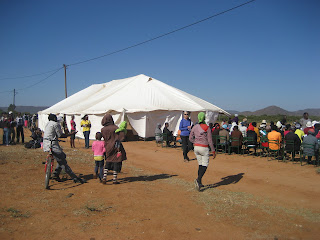 Everyone waiting for the event to start 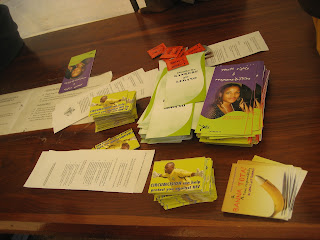 Pamphlets from the District Health Management Team in Mahalapye, Botswana National Youth Council in Gaborone, condoms, and information that Bright Mosimegi and I designed the night before.  Bright was the keynote speaker.  She is a nurse at the clinic and one of my favorite people to work with in Shoshong.  If I am asked to go speak at a school, she will always accompany me.  She is one of the main reasons the event was such a success. 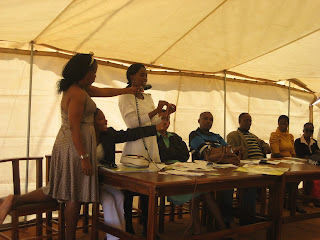 Bright giving a condom demonstration as part of her speech.  Holding the microphone is Baetsi, one of the MCs.  Holding the penis model is Mma Kwasiwa, the woman at Mahalapye Hospital who actually does the circumcision surgeries.  To Bright's left is Mma Tshireletso, a health educator at Sheleketla Clinic in Shoshong.  She spoke about the connection between child labor and HIV/AIDS.  To her left is Rra Boetelo, one of the councilmen in Shoshong.  Farther left is the pastor who gave the opening prayer; Polao, who works for adult education in Shoshong; and Tshepo, a woman who works at the District Health Management Team in Mahalapye. 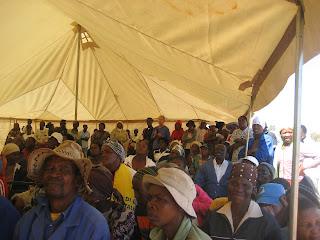 Two drama groups performed as people looked on, including my friend Susan, a Peace Corps Volunteer in a nearby village called Kalamare.  You can see her standing up in back. 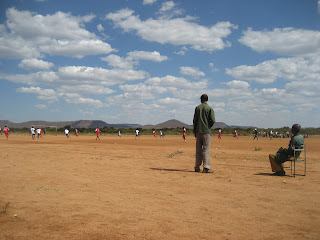 I made about 500 sheets of information about male circumcision and pap smears.  Bright and I wrote them the night before.  Susan and some of the nurses at the clinic helped me fold and cut ALL of them. I have few left, which means that at least 400 people were exposed to some sort of message about taking care of their reproductive health.  Most watched the drama and some speeches.  Maybe 30 only saw the football game.

And if none of those people change their behavior or take care of their health after our event, so be it.  But the community worked together.  That is beautiful in itself.