South Africa I: Penguins and L'Agulhas

I spent seven days in Cape Town, South Africa with a big group comprising of Peace Corps Volunteers, friends and family. I brought along two Batswana friends of mine, Sadi and Thatie. Jeremy (another PCV) also brought his sister, Jamie. We truly had a blast. 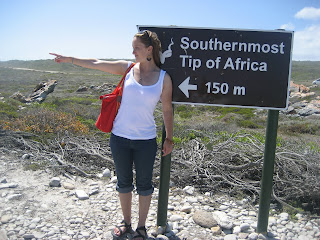 My favorite day was when Susan, Charlie, Sadi and I drove down the western coast of South Africa. We went to Cape L'Agulhas, which is the southernmost tip of Africa. It is where the Atlantic and Indian Oceans come together. The town is quaint and the views are spectacular. We rented a car and drove for hours to get there. Of course there were issues with the rental car (and still are, as I am disputing a transaction on my credit card, but that's international travel sometimes...) so we weren't able to leave Cape Town until about 11 am. We arrived in L'Agulhas around 1:30 pm.
We explored and took a bunch of pictures. Some are below. 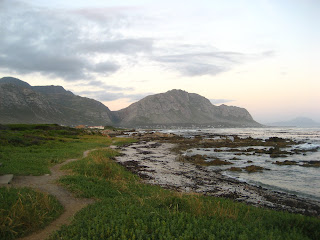 Driving along the coast 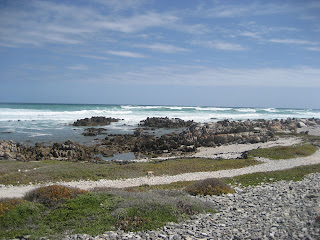 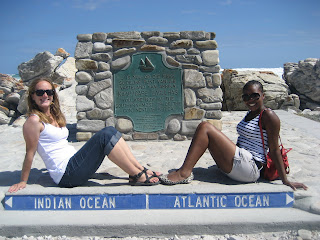 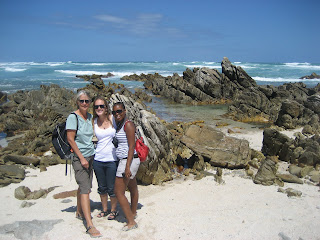 Susan, Sadi and I
Of course, I also took some sea shells and rocks as souvenirs.
We ate fish and chips for lunch at about 3:30 and began our trek back to Cape Town. We tried to stop and do some whale watching, but there were no whales to be seen that day. Luckily, we did get to see penguins at a town called Betty's Bay. It was Susan's goal for that day, so we didn't want to disappoint her. 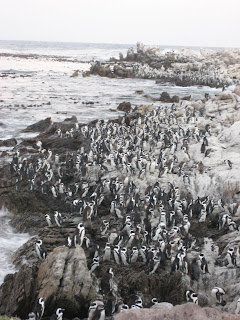 Betty's Bay has restaurants, things to do, and a town full of inhabitants. We thought there was no way that there could be a penguin colony in such a populated area. But we were wrong. There must have been hundreds of penguins enjoying the water and sitting on the rocks. 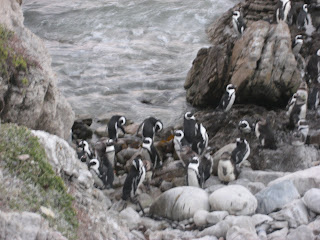 The penguin park was closed when we got there, so naturally we snuck in. I did get a video of the penguins, but it unfortunately will not upload so I will just have to share a couple of photos. 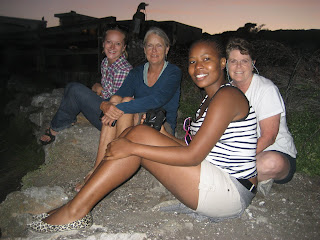 Susan, Charlie, Sadi and I at the Penguin Colony at Betty's Bay
We didn't leave Betty's Bay until almost dark and didn't get back to Cape Town until almost 11 pm. We navigated the whole trip old school--no phones, no computers; just a map and common sense. It was nice and reminded me of trips I had taken cross-country with my dad when I was 12.
Posted by Amelia at 10:45