The perk of holding language week in Kasane was the opportunity to tour through Chobe National Park one of the days.  We saw plenty of animals, learning many of the Setswana words for them.

First, we saw vultures circling.  That is always exciting because it means that there could be a fresh kill ahead.  If there is a fresh kill, there is a greater chance of seeing lions and other cats!  Unfortunately following the vultures led nowhere.

One of the things one instinctively knows is not to yell loudly when going through Chobe.  The animals are all around in their natural habitat.  In order to see them, one wants to AVOID scaring them away.  So, as we were attempting to follow the vultures (which kept circling in different places, never a good sign that there is actually something of interest) we passed a car.  The tourists in the other car shouted, "GO BACK THAT WAY!  LIONSSS!"  We were hoping their yelling hadn't scared away the lions.  So we doubled back near a small watering hole and lo and behold, saw a lion!

In this photo, she looks relatively docile.  What I couldn't capture was the moment when she thought we were a threat because we were following her in the car.  At that moment, she crouched down like she would pounce on us.  That was pretty scary.  But we turned around.  Crisis averted!

Next, we happened upon some meerkats.  We met many Americans in Kasane studying meerkats.  What exactly they are doing and why I will never know.  But here they are, in case you are interested. 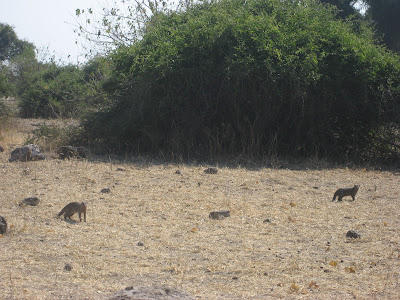 We saw LOTS of buffalo!

All of those animals were interesting (especially the lion), but I really wanted to see elephants.  That was my goal for the day.  And they tell you that the best time to see animals is early in the morning or near dusk.  So, as the hours wore on and there were no elephants in site, I began to be a little bummed out.  Then, around noon, as we were heading out, we came upon a whole herd (is that the right word?) of elephants!  They are BEAUTIFUL.  I love them! 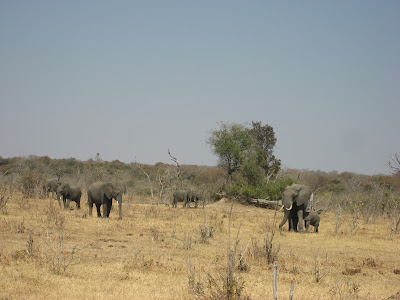 Elephants are unbelievable creatures.  Looking into their eyes, it's almost like you can see a personality and a soul.  They are so powerful, though, so trying to touch them is absolutely prohibited, especially if a mother has her baby nearby.  They are protective of their young.  Christina knows a lot about animals and she was telling us that elephants have lifespans similar to that of humans.  They live to be around 65 years old.  And when the young male elephants get to be teenagers, they are kicked out of the herd to make their own bachelor herd.  This helps to prevent inbreeding.  Then they must join a different herd.

We hadn't seen zebras throughout the day, so we were surprised to come near some.  Zebras are very skiddish so they turned and ran when they began to hear our car.

The giraffes were just co-mingling with the elephants.  I have seen giraffes in other places so I didn't take too many photos of them.

Later that day, we went on a boat tour.  Pictured below is Goitsemodimo, our tour guide.  Goitsemodimo means "to know God."  All Setswana names have meanings, oftentimes related to God. 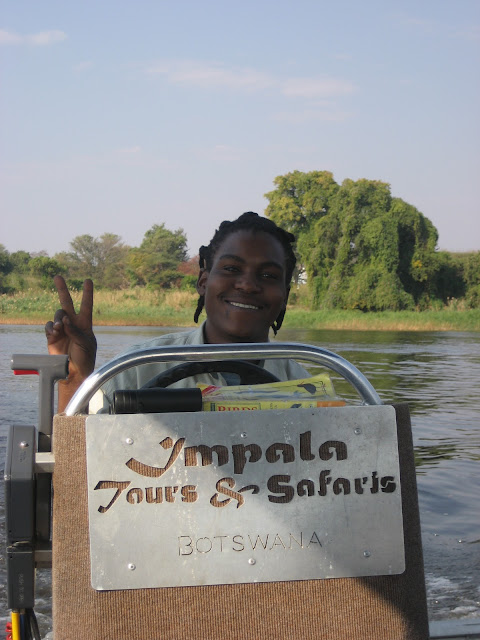 On the boat tour, we were able to see some animals that we didn't see much of on land in Chobe.  One was the crocodile.  The water was clean and beautiful, but unswimmable (I don't think that's a word but I like it so I am going to use it) because of crocs.


Finally we saw hippos!  Goitsemodimo told us that hippos are very territorial so we couldn't get too close in the boat.  Hippos are known for destroying boats and attacking when feeling even the slightest bit provoked.

All in all, the Kasane trip was amazing.  Kasane is also right across the border from Victoria Falls.  So if you visit the Falls, I urge you to come down and see some of the animals in Kasane.  Seeing animals in their natural environment, away from the zoo, is really special.
Posted by Amelia at 05:05