Brene Brown, a social worker/researcher, presented her findings as a TED Talk a couple years ago.  She began by trying to understand shame.  This preliminary question led her to life changing research about the nature of our vulnerability.  Brown says that shame is caused by the fear of not being accepted.  We all yearn to feel belonging.

Therefore, we create groups, microcosms based upon common characteristics.  By defining ourselves in certain ways, inherently the “other” is created.  That is the first step to stereotyping and discrimination.  We can create clubs based on income, interests, shared experiences, etc.  But the most common groups are created based on the most obvious differences between us: physical characteristics.  Race.

In the Peace Corps office, we have a whole shelf of old books volunteers leave when they return to the states.  There are enough books to keep all of us busy reading for months.  On my last trip there, I picked up a book called “For Whites Only” by Charles Cilliers.  It looked thought provoking (see cover below) so I took it.  I have about 10 books sitting in stacks in my house, but I decided to read this one.  Boy, I am glad I did. 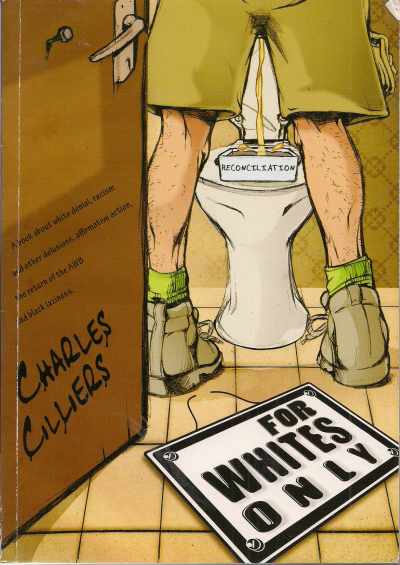 The book is about race in South Africa (see my first post about this here).  Cilliers is a white South African.  He wrote the book for other white South Africans, to make “us more open and willing to learn, as well as appreciative of the many white people who took a stand against apartheid and racism and helped to pave the way to democracy.”  I am not quite done with it, but will still wholeheartedly recommend it for ANYONE to read—any race, any nationality.  I read it particularly to draw parallels with race relations in America.

Lately, I have found myself comparing Americans and Batswana—not in a judgmental way per se, but more to just process the views engrained in me as part of my culture.  But I began to wonder if I was generalizing too much, lumping all Americans into my America as a white, middle-class female.  That being said, I grew up going to inner city Providence all the time.  My dad worked at a high school there.  My mom tried to open up a multicultural center while serving as an AmeriCorps volunteer in the south right after the assassination of Martin Luther King, Jr.  Needless to say, my parents were always inclusive of everyone.  I was never raised with any notion to think of someone differently because of the color of their skin.  But I still lived in a predominantly white area and attended predominantly white schools.  I cannot deny that being Caucasian is part of my identity.  Regardless of how we define ourselves—by the color of our skin or not—the world has a tendency to do so anyway.

You will oftentimes hear volunteers here say, “Batswana are like this….Batswana are like that.”  There are lazy people here for sure.  There are also incredibly hardworking people.  Same as in the states.  One thing Cillier’s book challenges is that race has anything to do with laziness/ambition/kindness etc.  If I grew up in Botswana, white or not, I would be a Motswana woman and view the world as they do.  Europeans were not inherently smarter or more progressive than Africans.  They just grew up in different environment, especially in terms of the availability of land, and were shaped differently.

Most Batswana are Christians, owing to the influence of European missionaries in the 1800s.  Traditional healers do exist, but they are much less common than before the European influence.  I have had many locals tell me that, for a while, Batswana accepted anything Europeans/Americans said because, “since it came from the white man, it had to be better.”  Luckily, that is changing.  But it is a past that I am conscious of.  I know that Peace Corps is different.  I know that Peace Corps volunteers are not just white.  We have volunteers that comprise all races, sexualities and backgrounds.  I also know that we are here to help the communities do things themselves.  But I was still slightly uncomfortable with the “photo op” of the white woman helping all of the poor, African children.  It is a theme we see time and time again in the news, cinema…everywhere.  The well-off, middle-class, white person goes in the hood and inspires all of the black thugs.  It is a motif I strongly dislike.

So where do I fit into it?  “For Whites Only” made me realize something truly beautiful.  The world may define me as a single, white female, but that doesn’t mean I must do the same.  I want to help those who need it—regardless of race.  And if that is in the black community in the United States, so be it.  If it is in white suburbia, so be it.  I don’t need to define myself based on the color of my skin.  Obviously it is part of me and has helped to shape who I am but not any more than all the other events and experiences in my upbringing.

I can define myself as white. American. Woman. Westerner. Rhode Islander.  But I can also say that I love music, I love to dance, I love to swim, I love to read.  And then how different am I from Batswana?  I want to stop looking at the differences and start looking at the similarities.  There is a lot more that unites us than divides us.  We have the most important thing in common.  We’re human.
Posted by Amelia at 11:15