I have been very lucky to find three very close Batswana girlfriends since I have been here. I can talk with them about anything I would confide in friends at home about. And since friends at home aren't always accessible, it is amazing to have found such good friends while in Botswana. Their names are Zola, Shosho and Sadi. Zola is the daughter of a local restaurant/bar owner. Shosho came over my house when I first got here to help Mma Mosinyi put up my curtains. And Sadi picked me up when I was hitchhiking to Mahalapye one day. Lasting friendships, for sure.
Nothing replaces missing my best friend from childhood's wedding and the birth of her first child. But watching my close friends here celebrating those milestones almost makes me feel like I am celebrating everything I missed. Zola is supposed to give birth in February. And Sadi just got married this past Saturday.
In Botswana, there are two wedding ceremonies. The first is the traditional wedding. Sadi and TJ (her husband) don't have a marriage certificate yet, but in the eyes of the community, they have been married. They will get the marriage certificate when they do their white wedding in March. Luckily, their white wedding will be catered which means I can just enjoy it and won't have to cook! Very much looking forward to it. 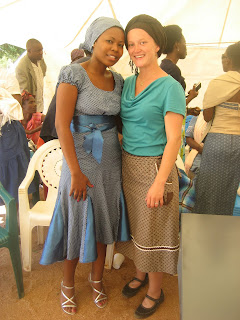 Me and Sadi
I was at the wedding site (Sadi's paternal grandmother's house) until late Friday night helping them prepare. Then Sadi's brother picked me up at my house and brought me back 5 am Saturday morning. We did things like cutting cabbage and carrots to make cole slaw, peeling squash, and carrying large plates of traditional dishes like semp, bogobe, and phaletsche. Other victims of early morning cooking: 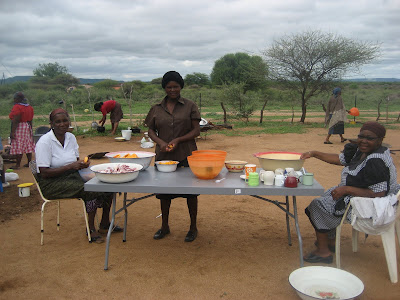 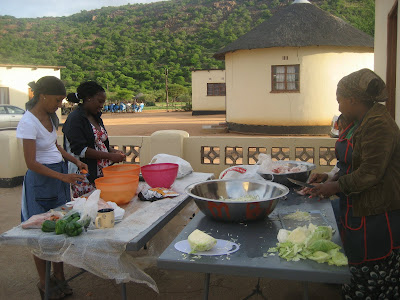 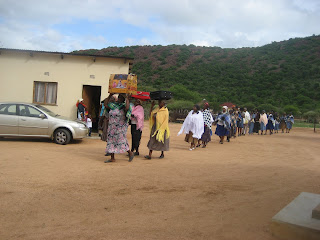 The women who were participating in the ceremony arrived around 6:30 am
Meanwhile, we (the single women and some of the married women) were cooking and hanging out. Any event--wedding or funeral--the women do all of the work. The men simply sit and "discuss" or drink tea, or something. And after a while, it gets pretty tiresome for me. That being said, I had a really good time meeting Sadi's family, especially her cousins. 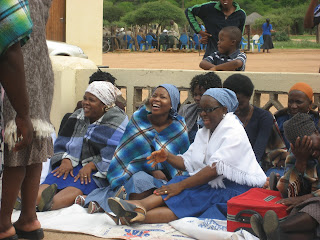 Sadi then arrived around 8 am. But she couldn't come until the families had summoned her. Then the older women dressed Sadi in her traditional Botswana bride outfit. They brought her over to the house where all the women were sitting and paraded her around while singing. After that, she was made to sit down (shown left).
Later, the groom and the uncles greeted all of the women. I didn't take photos because I video taped that part. The women express excitement by "ululating," making a very loud whopping noise that I will NEVER be able to do. This couldn't be captured in a photo.
Then Sadi and the women went to the tent where they men were sitting. Like TJ did, Sadi went around and greeted each of the men. But the men don't make any celebratory noises unfortunately. They all then waited for us to finish cooking the food and serve them. 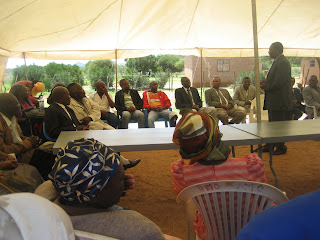 After everyone ate, the two families negotiated when the white wedding would be. They wanted it to be in July or August, much later than Sadi and TJ want. This hasn't been officially agreed upon yet, but this is one of those situations in which the wishes of the elders and the wishes of the bride and groom are at odds. The elders also wanted the wedding to be in Shoshong, but as I mentioned, TJ and Sadi want it to be in Gabs so that all of their friends can be present and do not have to cook the entire time (like I did for this one). 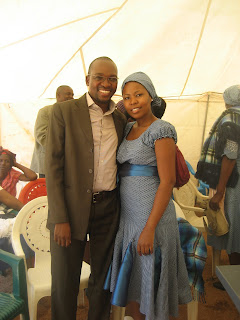 The happy couple at the end of the wedding. TJ and his family specifically made the dress for Sadi to wear on Saturday. Her shoes and undergarments are also picked out only for that day.
While I was cooking, many women told me that I should get married in Botswana so that they can throw me a party like this one. I politely declined and then explained to them what we do in the states. I told them that I don't mind cooking and I think it is a beautiful tradition, but that I want all of my family and friends to be able to relax, have a good time and be served their food by others.
Another interesting thing: TJ told me that he was not allowed to kiss Sadi...at their wedding! That may happen at the white wedding, but it didn't happen at this one.
All in all, it was beautiful to be able to share this day with my close friend and I am so happy for her. Celebrating another culture is wonderful for many reasons. But sometimes the most important reason is that it reaffirms your own identity. Through living in Botswana, I have begun to reclaim my American identity and view it in a more positive light than I have in a long time.
Posted by Amelia at 17:20